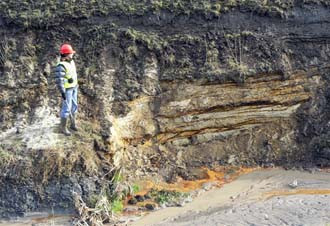 The Cretaceous rocks overstep the Jurassic to a slight extent, mostly cutting out the outcrop of the Wealden Beds. The lowest member, the Aptian Lower Greensand, tends to form boggy land over which the overlying Gault Clay flows and is poorly exposed, though temporary excavations around Devizes have revealed fossiliferous sandstone bands within loamy sands. The Seend Ironsands have yielded Parahoplites nutfieldensis and are therefore of this age.﻿ 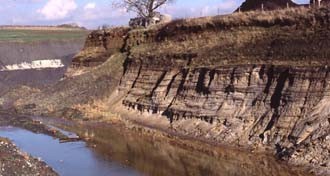 Another classic source of Lower Cretaceous fossils (Hoplites spp) was the disused brickyard at Caen Hill, Devizes, where the Albian Gault Clay is condensed and incomplete, with a sandy facies coming in early at the top (biozone of Mortoniceras inflatum). The Upper Greensand is thickly developed and well exposed around Devizes, particularly in deeply sunk lanes and tracks. Mostly fine sand, it also contains consolidated bands which are substantial enough to have been exploited for building stone at one quarry.﻿ 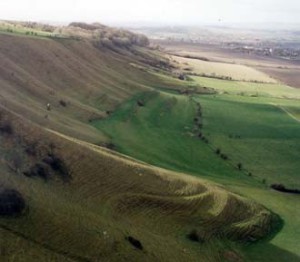 The beds of the Chalk formation build some of the most spectacular scarp and downland scenery in Wiltshire. Mineralogically the transition from the Upper Greensand to Grey (Lower) Chalk is gradual, the basal beds being very sandy and glauconitic. These levels include the famous Warminster Greensand and the Cenomanian Basement Bed or Glauconitic Marl, (both these beds are now incorporated as the Melbury Sandstone).

"Proper" Chalk begins with the Zig Zag Chalk Member, which forms the basal third of the escarpment around Salisbury Plain. The lower beds have a grey appearance due to a silt content, but the chalk gradually whitens and becomes more massive upwards in the section known as the Plenus Marls, after a characteristic belemnite. 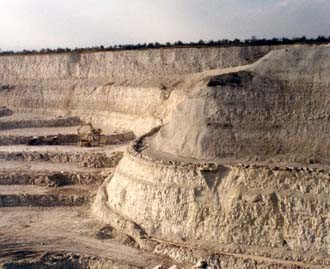 The base of the White (Middle and Upper) Chalk occurs at a hard nodular band known as the Melbourn Rock, whilst the remainder of the formation, 20 to 40 metres thick, is divided into the Holywell Nodular Chalk Member and the New Pit Chalk Member.

In the highest levels of the outcrop flints become common. The Lewes Nodular Chalk Formation caps the highest escarpments. At its base, the Chalk Rock is rich in glauconitised/phosphatised erosion surfaces (hardgrounds), four in the outcrop on White Sheet Hill. The topmost members of the White Chalk, some 60m thick, are typical firm, white chalk with regular courses of flint nodules.