The eastern margins of Wiltshire overlap into the corners of the two English basins which preserve Tertiary Palaeogene rocks, the London Basin and the Hampshire Basin. The outcrops pertinent to Wiltshire occur in Savernake Forest and the New Forest. They rest unconformably on the Cretaceous rocks. Four formations are represented, each consisting of clays and sands of differing sources and varying proportions. From below these are:

2. The London Clay (5m): a clay of marine origin which nevertheless is well known for a rich fossil flora indicative of a subtropical climate

4. The Bracklesham Beds (up to 60m): clays and sands of marine origin (now called the Marsh Farm Formation). 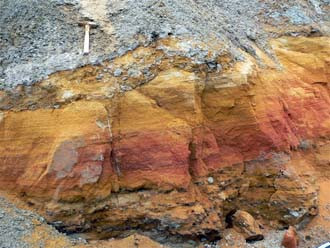 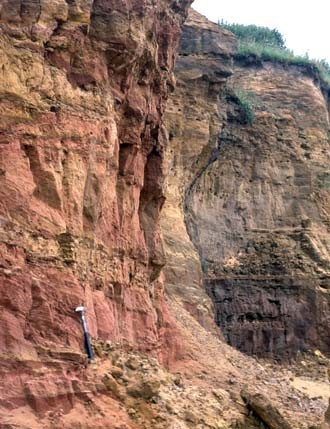 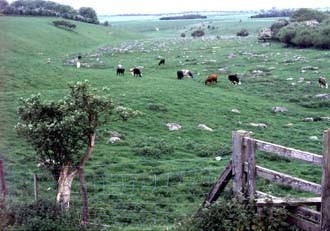 None of the above formations give rise to significant landscape features in Wiltshire, and most of the outcrop is covered either by woodland or acid scrubby heath.

However, scattered over the Marlborough Downs and Kennet valley, where the Tertiary sediments originally covering the Chalk have been eroded away, are areas of sarsen stones. These lumps of hard sandstone lying at or just below the surface are silcretes, the result of localised patchy cementation of Tertiary sands. The ubiquitous presence of fossil root holes in the sarsens, indicates that this cementation occurred at the same time that the plants were growing, near the ground surface. If the sands were situated around the level of the top of the water-table, in the warm climate prevailing during the Tertiary period water would be drawn up through the sands by capillary action as evaporation occurred at the surface; this would concentrate dissolved silica in the ground water to the point where locally it crystallised out, cementing the sand grains together. Subsequent erosion of the uncemented bulk of the Tertiary beds left these hardened patches behind to form the sarsens or greywethers, which litter the landscape in these parts of the county. Many have been broken up and removed over the centuries as a convenient source of building materials, from the Stone Age onwards, but some patches remain and now have conservation protection.